Darkness, Disruption, and Disorientation: Why Christmas Lights are so Important

“The People who walked in darkness have seen a great light.” Isiah the prophet is here referring to the advent of the Messiah, the coming of Christ. The Incarnation, the event of God becoming man, will, says Isiah, lead to the dispersion of the darkness of sin. This same idea is re-stated at the start of John’s Gospel: “The light shines in the darkness and the darkness has not overcome it.” Christ, the light of the world, has come, making manifest in our midst the fullness of God. The God seemingly shrouded in mystery and distance, unknown and unknowable, has now come among us. Christ, as light, illumines for us the path we should walk in an ever-deepening relationship with Him, who is the “Way, the Truth, and the Life.”

All of this gives theological underpinning to the practice of Christmas lights. What better way to commemorate the birth of Christ, the One who is the light of the world, than to place lights in our windows, on our trees, around our homes? Such lights may help remind us, and stand as visible instances, of the one true Light come into the world at Christmas.

Yet—and pardon the pun—there may be a darker side to Christmas lights, in that they, like many such seasonal objects, become merely one more to-do item on the proverbial Xmas check list. Put better: Christmas lights, like Christmas music, Christmas cookies, Christmas caroling, Christmas parties, etc., are part of the culture which enshrines and expresses the positive and joyful aspects of Yuletide, but which leaves unacknowledged and unaddressed the more frightening and genuinely disturbing elements of December the 25th.

Think back to the quotations above concerning Christ as the light of the world. What is left unsaid by Isiah and St. John is the fact that the dawning of light onto a people of darkness will be disruptive, a seemingly violent event. The light will not come upon them easily or without effort. In short, the brightness of this light will be at first utterly blinding and disorienting for those accustomed to darkness. It will initially appear cataclysmic and awful, something to resist and fight against. We can just as easily be “blinded by the light,” as we can by the darkness, especially if we have become used to or even identified with the darkness.

Roughly 2400 years ago and around 400 years prior to Christ’s birth, Plato provided the most striking image of this truth in his famous “Allegory of the Cave.” The prisoners in that darkened cave, chained up since birth and facing a wall on which are shown shadowy images of various objects, come to believe that such shadows are the real things.

Yet one prisoner is somehow freed. He slowly turns around, full of trepidation and confusion, only to confront a fire, the light of which projects onto the wall the aforementioned shadows. But to the prisoner, raised in the shadowy darkened section of the cave, this fire light is blinding. And after he grows accustomed to it, he then must confront an even more disturbing fact: that the images on the wall are just that, mere shadows and reflections, not actual objects as he previously believed. Awash in confusion and fear, the prisoner struggles to make sense of this new world opened up to him, as his prior “reality” has been turned upside down. Nonetheless, such turning is not yet over, as the prisoner is then dragged up outside the cave. The prior blinding from the fire is nothing compared with the total loss of sight which comes pursuant to his first experience of sunlight. Slowly he is able to see, but he still remains disoriented. Only after some considerable time and effort can he begin to make sense of the world outside the cave.

Eventually, he is able to look toward the sun, but never directly. At last, his prior life in the cave is shown to have been focused on images, shadows, poor reflections of true reality. He no longer feels any attachment to his former way of life. The original turning from the cave wall began a process culminating in the complete rejection of his prior existence.

What may stand out in this allegory are words such as “turning away,” “confusion,” “trepidation,” “blinding,” “rejection,” “upside down,” and “confront.” Moving from darkness to light, speaking both literally and metaphorically, is not a smooth, enjoyable, or even readily comprehensible process. It is difficult, demanding, disturbing, disheartening, and disorienting. It is difficult because it takes effort and commitment to stay with the process of coming to re-understand oneself and reality in a radically new way. It is demanding because it will cost our prior sense of things, prior worldview, maybe even prior occupation and way of life. It is disturbing, because it will upset greatly, and in fact overturn, our normal way of being in the world. It is disheartening because it means we will lose faith in what we previously believed and will not as yet have assurance about what will come. And it is disorienting because we have no concept of what is going on, where we are going, or how long this journey will take.

Something totally novel, previously unknown, obviously frightening, and apparently dangerous is occurring with such “light-shining” events. Think about the reaction of the shepherds as the angel announced to them the birth of Christ. “In that region there were shepherds out in the field, keeping watch of their flocks by night. And an angel of the Lord appeared to them, and the glory of the Lord shone around them, and they were filled with fear.” As God’s glory illumines the world surrounding the shepherds, it is easy to imagine them falling to the ground in terror and wanting to cover their eyes. Sam Keene stated that the divine is the mysterium tremendum, “awful, fearful, and threateningly powerful.” The shepherds’ encounter with the “glory of the Lord” was just that, an encounter with something “threateningly powerful.” Thus, even the message about the birth of Christ, let alone the actual event, is so disrupting, disturbing, and disorienting to cause great trepidation and anxiety.

As Plato stated, just prior to his famous allegory, light is the sine qua none of sight, the necessary condition for the possibility of seeing anything at all. But what Plato did not mention was the further fact that light so illumines and makes possible sight only insofar as one’s eyes are open and receptive toward it. Light can shine for us only because we are willing to use our eyes properly in regard to such light. Annie Dillard, in her Pilgrim at Tinker Creek, presents much the same concept. There, Dillard examines the literature concerning cataract operations performed on patients, which resulted in the restoration of their sight. As Dillard makes clear, for many such patients the process of coming to understand the world through sight is ultimately too difficult.

After the surgery, they experienced “a confusion of forms and colors,” a disorienting sense of space and objects in space, and a temporary inability to associate “color patches” with “tactual objects”; in short, they were faced with comprehending and being able to navigate around visible objects for the very first time. Thus, “the mental effort involved in these reasonings [i.e., about the newly visible world] proved overwhelming for many patients . . . A disheartening number of them refused to use their new vision . . . lapsing into apathy and despair.” One newly sighted patient, in fact, found the work of seeing so demanding and disorienting that she opted often to “close her eyelids [and] relapse into her former state of total blindness,” since it was, for her, so much more familiar. Dillard thus makes clear that blindness can be preferable to the disturbing and disrupting experience of sight. Put differently: there is often seemingly good reason to refuse to accept and pay attention to light and what it illuminates.

Which fact is even more pronounced when we consider the encounter with the light of Christ. That Light, as noted above, is “awful, fearful, and threateningly powerful.” Or, to quote from the philosopher Hans Jonas: this is the light of the God who is “radically other to . . . the totality of the created world” and comes upon the believer in a “startling and disconcerting” fashion. Jonas likewise states that “the radical transcendence of God breaks into” our lives in a seemingly incomprehensible manner. God’s coming presence is thus disruptive and confusing, so as to make difficult our acquiescence to it. After all, if the restoration of physical sight and the encounter with reality as illuminated by physical light is so “confusing” and disorientating as to lead to a chosen blindness, would not the restoration of spiritual sight and the encounter with reality illuminated by the terrible and frightening light of God be all the more confusing and disorienting? Would it not likewise lead to a chosen blindness?

Seeing and being able to navigate toward tables, chairs, and beds could become too much for numerous patients, who desired and opted for their former blindness. Seeing and drawing near Almighty God may also, I imagine, prove too much for many of us, myself more so than most, such that we would desire and opt for a familiar type of blindness, or at least the familiar, unillumined darkness. The light of God, come at Christmas, may indeed shine in the darkness, but like formerly blind patients, we may not be willing to accept the disruption and disorientation caused by this same light.

I realize I sound rather Grinch-like, especially given the horrible Covid-19 pandemic gripping the world. But such is not my intention at all. Rather, I am saying that the wonderfulness of Christmas—the coming of Almighty God among us!— is more awesome, amazing, and awe-inspiring than we could ever imagine. But it only becomes such for us if we are willing to accept the full weight of its glory, that is the disruption and disconcertedness of God’s light shining upon us. What is truly awesome can just as readily seem to be awful, perhaps especially when first encountered. The prisoner only understood and became freed from his life in the cave insofar as he allowed himself to experience fully the confusion, seeming incomprehensibility, and radical newness of the various lights illuminating his path. Had the confusion been too much or the effort too severe, he never would have been liberated from the literal and metaphorical chains of the cave. He, like the aforesaid patient, would have “relapsed into a former state of” darkness and unknowing. The awfulness of his initially confusing and wretched experience is what allowed for the subsequent awe-inspiring encounter with reality outside of the cave.

So, in the end, I am all for Christmas lights. They should, especially now, serve their purpose. That is, Christmas lights should be reminders for us not of the “glories of Christmases long, long ago,” but rather the disrupting, demanding, and disorienting “glory of the Lord,” which shone for the shepherds hearing of Christ’s birth and may likewise shine for us, if we allow ourselves the dread and terror of facing the illuminating presence of Almighty God. 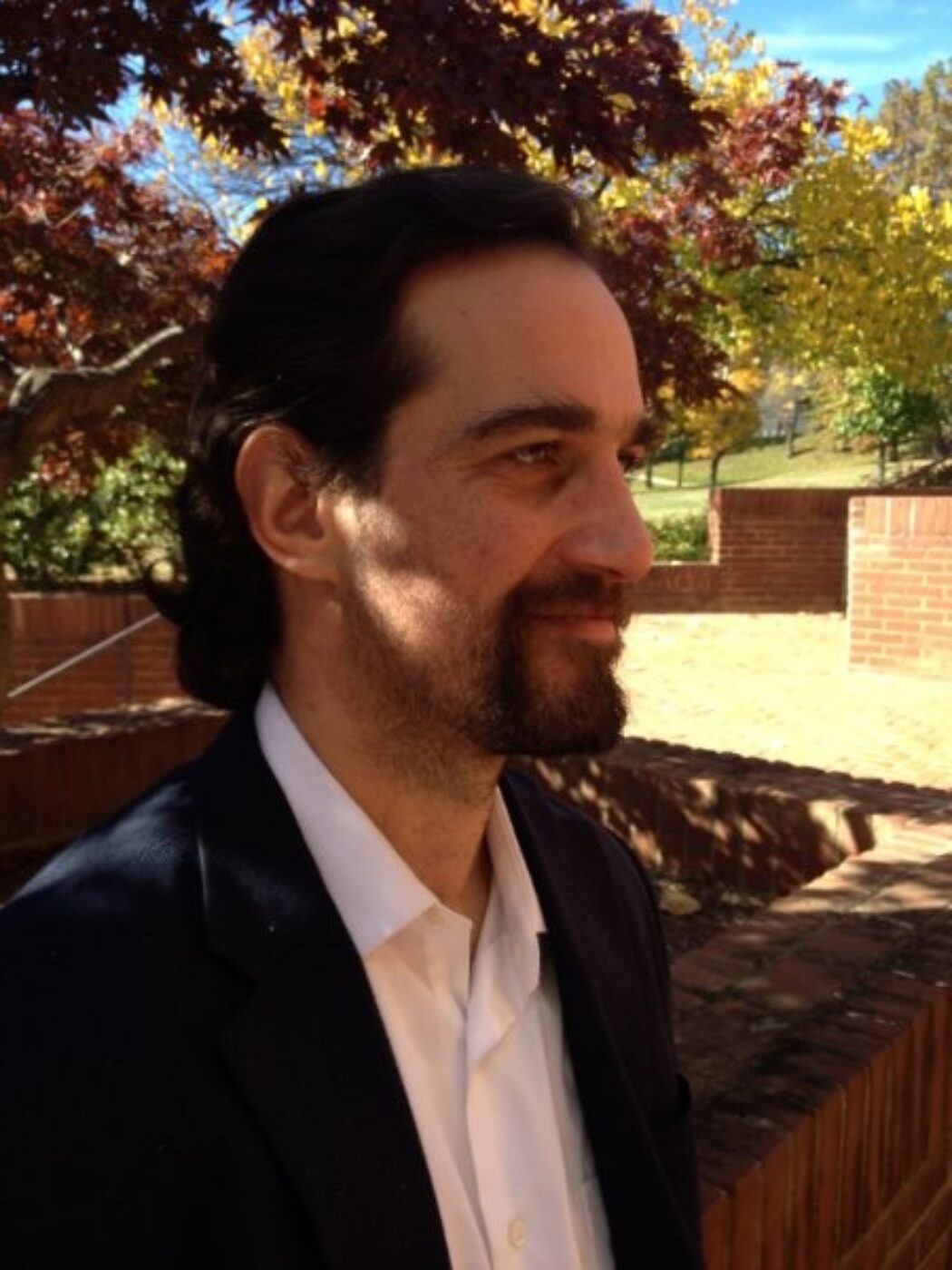 Matthew Pietropaoli received his BA from St. Anselm College and his MA and PhD from the Catholic University of America. His dissertation concerned the thought of German-American philosopher, Hans Jonas. Matthew has taught extensively at the undergraduate level, including courses on ancient philosophy, modern philosophy, ethics, and metaphysics. He was fortunate enough to grow up near the Adirondacks, which instilled a life-long love of the natural world.