The City of God - St. Bernard's

The City of God

“In the beginning God created the heavens and the earth. The earth was without form and void, and darkness was upon the face of the deep; and the Spirit of God was moving over the face of the waters" (Genesis 1:1-3).

St. Augustine wrote De Civitate Dei in the aftermath of the fall of the city of Rome. Its immediate purpose was to address the pagan accusation that the adoption of the Faith by many citizens and by the State had caused a moral weakening of the citizenry which in-turn led to the fall of the city. Beyond that, it is an apologetic work contra paganos. And beyond that, it is an account of universal history and of the action of Divine Providence: of God’s will as expressed in the history of men and of the World. But it is beyond that that its true character emerges – as a meditation upon the Mind of God – the Divine Logos. For it is upon the reality of the Divine Logos that everything turns.

For if it is not true that the world was created and is ruled by the Divine Logos, then it appears that we owe all that we are, know and have to an accident of eternal atomic material, as was said by the Epicurean philosopher, Lucretius. All things are, then, born of and governed by an accident: a random contingency with seeming consequence that is, in-fact, of no consequence at all. It is the One, or it is other. Genesis and De Rerum Natura face squarely the question of the Divine Logos – and perhaps only they can make sense of the images of the firmament we are now coming to see – images which formerly presented themselves to all peoples every evening – before they were obscured by our activities. And it is these two accounts which acknowledge what even we all know: that we are dust.

It is upon the reality of the Divine Logos that our civilization was founded, and upon which it also turns. It is upon the apprehension of the Divine Logos by the Hebrew prophets and rabbis and by Plato and his successors that the underlying unity of Athens and Jerusalem is revealed, and it is upon this underlying unity that the tensions between the two could generate civilization in its most fruitful and universal character.

In Part Three of De Civitate Dei, St. Augustine turns to the “Origin of the Two Cities” and says: “The expression ‘City of God,’ which I have been using, is justified by that scripture whose divine authority puts it above the literature of all other people and brings under its sway every type of human genius – and that, not by some casual intellectual reaction, but by a disposition of Divine Providence.” Centuries later, commenting upon the course of human history since the time of St. Augustine, philosopher, Giovanni Battista Vico, says in La Scienza Nuova: “…but this world has without doubt issued from a mind often diverse, at times quite contrary, and always superior to the particular ends that men had proposed for themselves.”

“And the Lord came down to see the city and the tower, which the sons of men had built. And the Lord said, ‘“Behold, they are one people, and they have all one language, and this is only the beginning of what they will do; and nothing that they propose to do will be impossible for them... and from there the Lord scattered them abroad over the face of the earth” (Genesis 11:5-6).

But this has not stopped us from “proposing for ourselves” ends of our own with which we might oppose and overcome God’s dominion – ends which propose to replace God’s will and judgement with our own. We have announced that history is our exclusive domain, and we have proposed to humanize all of reality with our artifices – with our technology. Not merely to follow the commandment to, “Be fruitful and multiply, and fill the earth and subdue it…” but to remake reality in our own image. To replace the Imago Dei with our own. To reject - not disprove - that we are made and that the earth is given.

Italian Catholic philosopher, Augusto del Noce, says, in meditation upon Augustine: “… the true antithesis of the idea of revolution, understood in the strong sense, is not the idea of nihilism but that of Providence. The idea of Providence, as affirmation of the divine governance of the world, is the opposite of the idea of revolution, aimed at achieving its complete human governance. For such an idea of Providence, let us use Vico’s classic definition.” A definition, I might add, that was born of a lifetime of contemplation upon the consequences of human action – of meditation upon the consequences of “those actions that men had proposed to themselves.”

And it is precisely here that we come to see the fundamental reality of that discrepancy between the mind of God and that portion which He has given us. For, as we propose to comprehensively humanize all of creation via our tools, our technology – our means - we comprehensively de-humanize it in-fact. At the ideal and real endpoint of this dream, we reach the realization that we cannot humanize all of reality, but must instead build devices which will do so – devices which, by our own admission, we cannot ourselves understand – “whose” “decision-making” will be and will remain opaque to us. We propose, then, to deliver ourselves into servitude to that which we propose to make – a sort of Baal who will – hopefully - save us from ourselves. That is, if we will but remain obedient to it.

Del Noce calls this “the heterogenesis of (human) ends,” and it is a corollary to and sign of the reality of God’s will – of Divine Providence: “Indeed, if the (French) revolution completely succeeded and completely failed at the same time, since it realized not something different from what it intended, but the very opposite, if in its regard we must speak of a complete heterogenesis of ends…” Let The Bomb be a sign of this fundamental reality – as a sign of contradiction.

We have not made ourselves or this world, and we cannot remake or save ourselves. We cannot transcend ourselves any more than we can banish death. We resolve to be other, and then we are not. In our state, all that we do and all that we make reflect the meaning of what we are and so what we then must be.

It is then the reassertion of God over His dominion via the scattering of the people of Babel that recalls His mercy and our true hope after the Fall: “… lest he put forth his hand and take also of the tree of life, and eat, and live forever”- therefore the Lord God sent him forth from the garden of Eden, to till the ground from which he was taken” (Genesis 3:23).

We are not lost, nor abandoned, and we have not been “thrown” here. And so, as was said by Abraham and recalled by Mary: “We must obey God in all things.” 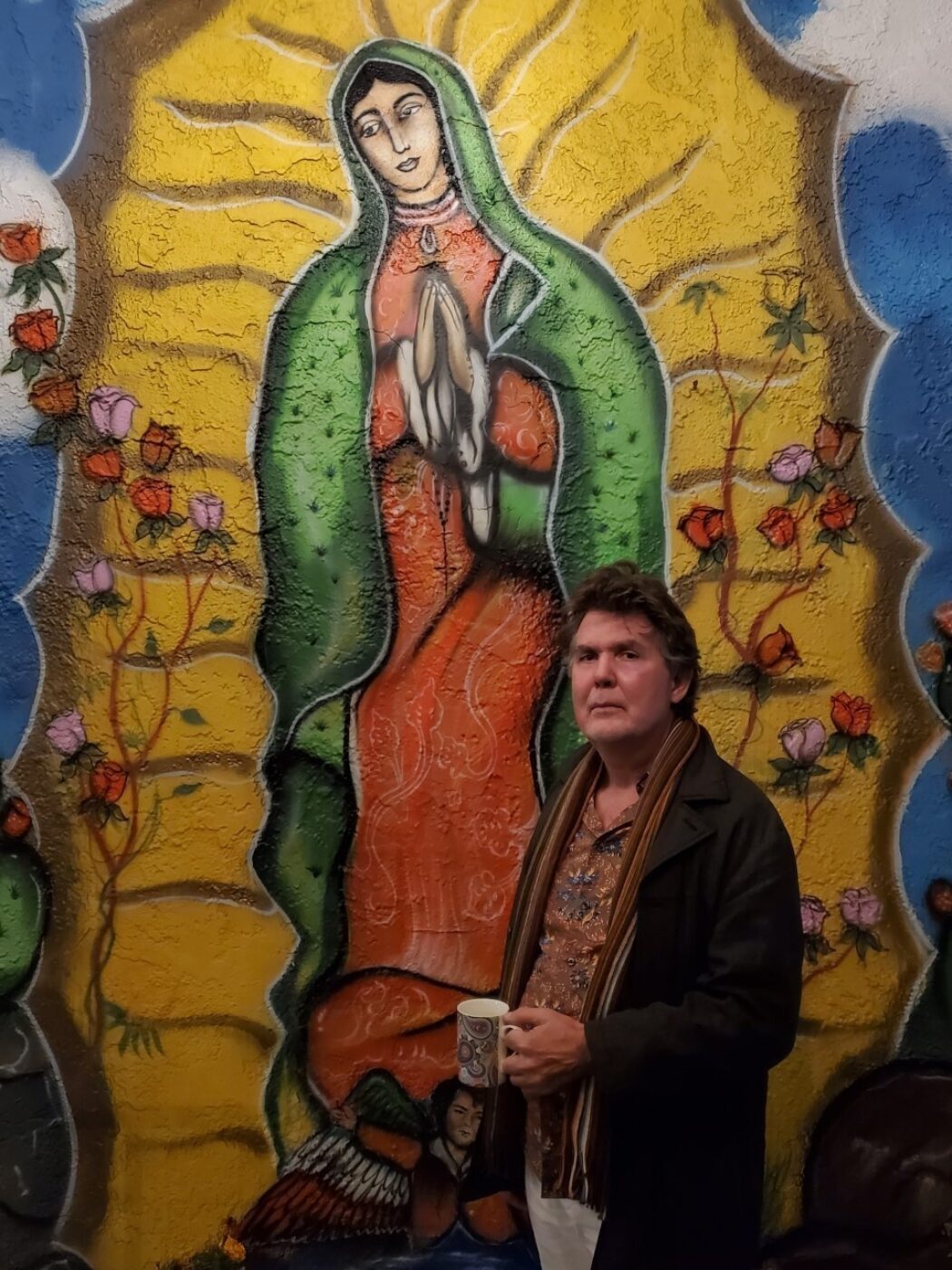 I thank St. Bernard’s for inviting me to share my thoughts concerning my Patron, St. Augustine. I dedicate this to his mother, St. Monica, the image of Our Mother.