The Church as an Event with Dr. Giovanni Maddalena - St. Bernard's

The Church as an Event with Dr. Giovanni Maddalena

On October 15th Pope Francis gathered with the members of the lay Catholic movement, Communion and Liberation, to celebrate the centenary of the birth of Msgr. Luigi Giussani, the founder of the movement. Fr. Giussani notoriously used to say that “he never meant to found anything,” and that at the origin of the movement he saw taking shape around him was only his desire to announce with renewed force the event of Christ in history and the possibility of following Him today in His Church.

In remembering the importance that Fr. Giussani’s books played in his personal formation as a priest and as a thinker, Pope Francis also recognized the gift that Fr. Giussani represents for the universal Church: “The Church recognizes his pedagogical and theological genius, deployed from a charism that was given to him by the Holy Spirit for the ‘common good’.” The Pope continues, “It is not mere nostalgia that leads us to celebrate this centenary, but the grateful memory of his presence: not only in our biographies and our hearts, but in the communion of saints, from where he intercedes for all his own.”

Moved by the same gratitude, St. Bernard’s School of Theology and Ministry had the pleasure to host a lecture on the life and thought of Fr. Luigi Giussani last Thursday, December 1st. The speaker, Dr. Giovanni Maddalena, is a full professor of theoretical philosophy at the Università del Molise, Italy. He spoke beautifully about Fr. Giussani not only thanks to his deep knowledge of his thought, but also moved by the personal friendship that tied the two for years.

Dr. Maddalena chose to include in his presentation title the words used by the Pope, “The Church Recognizes His Pedagogical and Theological Genius: Fr. Giussani and the Church as an Event.” In what follows, I would like to briefly talk about three main points that Dr. Maddalena articulated in his presentation of Fr. Giussani’s approach to Christianity: 1) the category of event, 2) the personal relationship with Christ, and 3) the preconditions for announcing Christ.

What is the theological meaning of stressing that the Church is an event? Fr. Giussani, drawing from other theological sources, in particular Romano Guardini, used to say that the Incarnation of Christ is a “fact.” Before being the source of an ideal, an ethics, a view of the world, etc., the Incarnation is a fact. Dr. Maddalena explained that this seemingly simple statement carries within itself a revolutionary way to look at the relationship between man and God, that is, the revolution of the “Christian method,” which announces that God has definitively revealed Himself and has made Himself a companion to humankind through the concrete, historical person of Jesus Christ.

Fr. Giussani used to explain his amazement at the concreteness of the method chosen by God to reveal Himself by remembering the first time he saw the plaque at the house of Mary in Nazareth which states: “Verbum caro hic factum est,” “The Word became flesh here.” The method chosen by God is not that of an interior inspiration, but that of a human friendship, with all the concreteness of such friendship. In this sense, Christ is an event: an unpredictable and surprising fact that reaches us within the concreteness of our life. Dr. Maddalena also stressed how the categories of fact and event allow us to avoid the frequent reduction of Christianity to an ideology or a system of moral beliefs. Nothing would be further from the truth of Christianity. We are never at the origin of Christianity, not even when we have all the doctrine right or all the ethical norms in the right place. At the origin there is the surprising event of Christ, which reaches us today in the concreteness of the life of the Church.

Dr. Maddalena also shared how Fr. Giussani always insisted on the importance of a personal relationship with Christ. It would be a mistake, in fact, to oppose the sacramental value of the Church and the crucial and fundamental importance of the personal and unique relationship that the believer has with Christ. On the contrary, such a personal relationship is the fruit, as it were, of our belonging in the Church. One should not overlook the timely relevance of this truth, especially in a Catholic world which seems to have lost the sense of its ‘center’ – a world which seems split between those who think that it is possible to propose the faith as primarily a list of doctrines to endorse and a series of rituals to follow, and those who think that a self-normative conscience can trump the objective sacramentality of the Church and Her tradition.

This ‘center,’ Fr. Giussani says, is the personal relationship through which Christ binds each one of us to Him in and through His Church. In At the Origin of the Christian Claim, a book the importance of which Dr. Maddalena emphasized, Fr. Giussani focuses on the pedagogical genius used by Christ in accompanying His disciples to slowly believe in Him, with an authority which is full of a deeply human tenderness. Instead of opposing the right and the left, the doctrinal and the pastoral, truth and charity, etc., one should rediscover the centrality of the personal relationship with Christ within His Church.

Finally, Dr. Maddalena explained how Fr. Giussani understood the preconditions for announcing Christ. What are these preconditions? None!, simply put. In a famous interview with Cardinal Angelo Scola, Fr. Giussani explains that at the origin of the life of Communion and Liberation there is not a philosophical and theological reflection on the “religious sense” or the “heart,” namely, the human desire for the infinite. At the origin there is the announcing of Christ and the personal encounter with Him in the Church. We see here at work one of Fr. Giussani’s deepest insights: it is not true that man has to explore his religious nature as a form of preparation to encountering (or being encountered by…) Christ. The encounter with Christ comes first! And one of the many gifts of this encounter is precisely the discovery that our own nature is deeper, bigger, and higher than what we usually think – that it has an infinite measure, namely, the measure of the infinite.

Dr. Maddalena invited us to consider how this has always been true in the history of the Church, from the events narrated in the New Testament to our present day. Christ calls to Himself (‘vocare,’ to call, hence ‘vocation’) everybody, without preconditions, without privileging those who have an already nourished ‘spiritual’ or ‘intellectual’ life. And this is a liberating truth about our experience: Christ can manifest Himself even in the most mundane aspects of our everyday life – even when we are doing the dishes or we are thinking about paying the bills and we are far from thinking deep theological or philosophical thoughts! 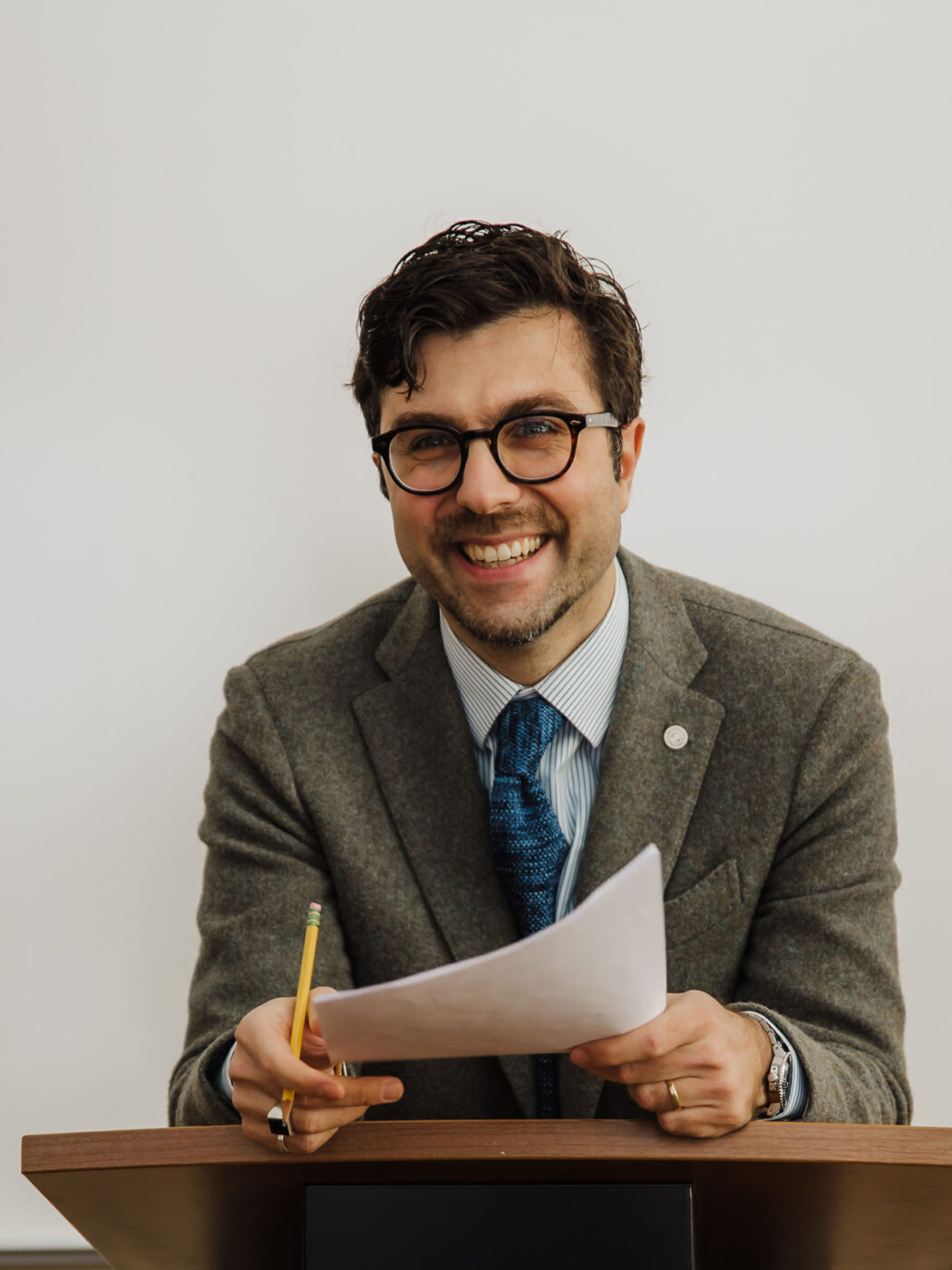 Dr. Marco Stango is Assistant Professor of Philosophy at St. Bernard's School of Theology and Ministry. Dr. Stango did his graduate studies in philosophy at the Catholic University of the Sacred Heart of Milan (Italy) and the University of Macerata (Italy). Before coming to St. Bernard's, he was Assistant Professor of Philosophy at DeSales University in Allentown, PA, but he has also worked for other universities, both in the U.S. and Chile. He has articles published in various academic journals, including International Philosophical Quarterly, Proceedings of the American Catholic Philosophical Association, The Heythrop Journal, Idealistic Studies, and Transactions of the Charles S. Peirce Society. He is interested in the Catholic philosophical tradition, the history of philosophy, and all topics lying at the intersection of metaphysics and anthropology.